skip to main | skip to sidebar

Before the fall of the Berlin wall.

Wow..20 years already. One of the most vibrant memories in my personal history, that ecstatic moment when the Berlin wall fell, seeing that on tv as a kid was amazing. Especially since only a couple of months before my mother took us to Berlin to see it upclose, she must have sensed something historical was about to happen. Thanks for that mom! These pictures where the ones I took when we were there, must have been around July or August 1989. Funny to see these pictures now, since they are taken from a graffiti point of view, the classic composition for archieving pieces, and neglecting the background, but hey, I was 13! 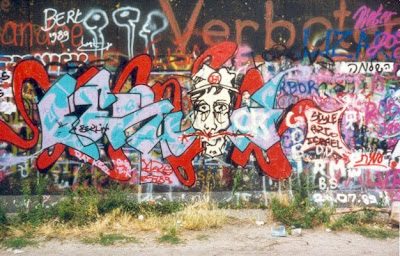 "Berlin" in that classic '88/'89 style, I like the roughness, just 4 colors and black. Also the character has "Ost"(East) on his hat, and his face behind barb wire, the look of it made a deep impact on me. I also remember seeing thousands of messages with just one or two names and a date next to it, the classic tree-graffiti standard, marking a moment in time. "I was here", build to last. A frightening idea in retrospect, at that moment history was still in the making... 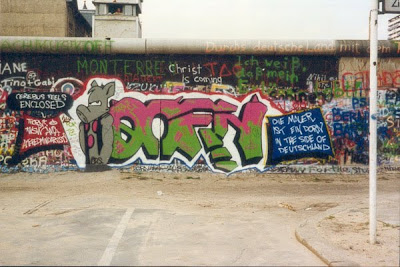 "Die Mauer ist ein Dorn in the side of Deutschland", nice words.I wonder what that guard was thinking...I clearly remember looking at the guards in the towers and realising the impact of what side of the wall I was on. Part of the Berlin trip was a visit to East Berlin as well, I remember vividly the border-checks with mirrors under the bus, the passport-checks, the streetviews in shades of grey and the bullet-holes in the buildings. And the fact that the other side of the wall had no graffiti! Going through the wall was like going through a weird one-way portal into a different dimension...and actually that's what it was. 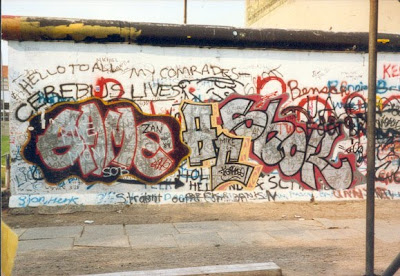 It almost looks as if the wall ends there, but it was a corner in fact. Somewhere close to the Reichstag I think. I remember behind the Reichstag they had a big fence with flowers and crosses on it, remembering the people that tried to escape at that spot, swimming across the Spree. 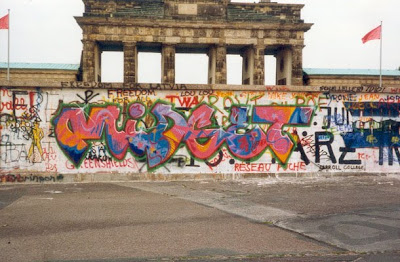 A beautiful "Midget"-piece on an ugly wall. Classic spot, I had this picture on my wall for a long time. I loved seeing people on top of the wall on tv only a couple of months later, slamming their hammers in the wall and even recognising this exact spot on tv, but in such a different context! Wunderbar.

Really nicely written. I can't believe it's been twenty years already either. Seriously, the time flies. It's amazing, though, that even people in the US or here in Canada remember that day.

was in Berlin at this time,it was 20 years age,wow,..... great post,wish all the best from Poland